Within Conques-Sur-Orbiel you can find both a café and a restaurant together with a selection of local shops which include Boulangeries, hairdresser, café, restaurant and a pharmacy.

A supermarket, gas station, movie complex are within a 10 minute drive.

By Car
If you are traveling here by car you need to leave the main A61 / E90 at either junction 23 (Carcassonne Ouest) or 24 (Carcassonne Est), from there head for and take D6113 followed by D149/D201 which will lead you past the village.

By Air
The nearest airport is Carcassonne airport which is only 10 kms away. Carcassonne is well served by Ryanair, which flies here direct from Stansted, Bournemouth, Liverpool, East Midlands, Glasgow and Dublin along with Brussels, Billund, Paris-Bauvais, Eindhoven and Porto.

There are five other airports that are within a relatively easy drive, they are: Toulouse, Perpignan, Montpellier, Béziers and Nimes.

Your holiday will certainly include sightseeing and other activities in the region. The medieval fortified town of Carcassonne is minutes away, along with the famous 17th century Canal du Midi (both UNESCO heritage sites).

The Cité of Carcassonne
The old city (12th-13th centuries) has double perimeter walls and 52 towers. St Nazaire basilica is built in Romanesque and gothic styles. On the left bank of the Aude river, the Lower Town (13th century) is worth a visit. Fireworks 14 July. Festival (events including concerts) from July to end of August.

Canal du Midi
Undertaken by Pierre-Paul Riquet in the 17th century to link the Atlantic to the Mediterranean, it crosses the Aude from West to East over a distance of more than 100 kms. House boating holidays is popular from the main towns on the Canal: Castelnaudary, Bram, Carcassonne, Trèbes, Homps, Le Somail, Argens-Minervois, Ginestas, Narbonne. Passenger boat: 1 hour, 2 hours, half day on the Canal departing from Castelnaudary, Bram, Carcassonne, Trèbes, Homps, Le Somail, Narbonne. You can also hire bikes along the canal.

Narbonne
Roman horreum or warehouse: Vast underground storerooms of perishable goods. The Horreum is the only surviving Roman remains in Narbonne open to the public (built 1st cent. BC) Archibishop’s Palace : Museum of Art and History and Archeological Museum. Museums occupying the former Archibishop’s Palace built in the 12th – 14th centuries. The collections are made up of finds recovered from digs in the Aude département.

Fontfroide Abbey
Founded at the end of the 11th century by the Benedictines, it immediately became very prosperous. Affiliated to the Cistercian order in 1145, it was a bastion of religious orthodoxy during the period of the crusade against the Albigensian heretics. 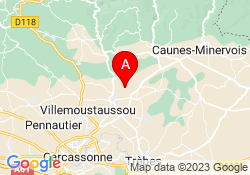